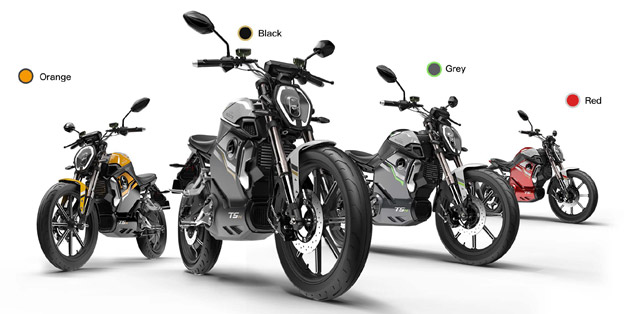 V-Moto has come with a new electric bike called the TSx that looks like TS on a first sight but has the performance of the TC. The components as battery, Bosh motor and controller are the same as in the TC. This machine is designed as a beginner model. It’s the equivalent to a 50cc motorcycle, according to Electric Motorcycles News and targeted at brand new beginner riders. Folks who have never ridden before and just need something for around town.

The motorcycle has a top speed of 70km/h and a curb weight of only 70kg. It’s as benign as motorcycles come. The Bosch 1500W electric motor is perfect for the bike’s purpose and has two power modes. One limits the bike to 45km/h, and the other allows up to 70km/h. The bike can do 65km per charge (if you keep it at a low speed), but it has a compartment for you to add a second battery that can boost the range to 130km per charge. Each battery takes three and a half hours to charge fully.

Super Soco TSx provides space for two removable Lithium batteries for a driving range of 130 km. The batteries are of the same type as the batteries used in the Tesla Model S.

The batteries are equipped with an advanced battery management system (BMS) that protects it from over-discharge and ensures long term battery life. Every single cell is 5mm apart from the adjacent cell, resulting in heat dissipation 4 times greater than conventional compact battery designs, thereby extending their lifespan. The battery pack is encased in an elegant and strong aircraft aluminum shell. 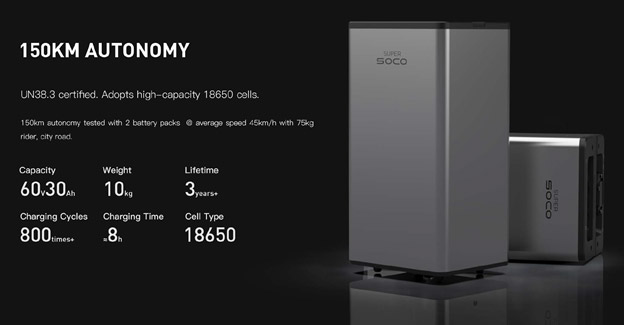 The batteries have a unique charging innovation that enable to charge the batteries in 20 minutes for a range of up to 50km. The full charge time is 3 hours.

The battery compartment can take two batteries that will double its range. The batteries are also removable and can be charged on or off the bike. The battery BMS sophisticated algorithm dynamically calculates the State of Charge (SOC) and displays this on the dashboard in the form of remaining riding distance available at each mode.

The 12” BOSCH motor rotor is built into the cast aluminum wheel itself and it has been developed as precisely as a Swiss watch. 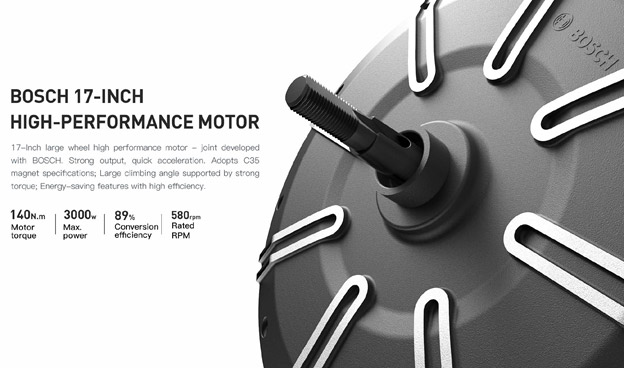 The rated power of the motor is 1500 watts, but it can effortlessly support a peak power of 3500 watts (equivalent to more than five horsepower) when accelerating or riding steep inclines. At full speed it rolls back to 800W when used on flat terrain, preventing overheating and extending the lifespan of the motor. Torque is the main performance specification of a bike and Super Soco TSx boasts over 150NM torque at speed of 45km/h.

The moped is waterproof so that it will be able to drive through water. The moped will enable to continue driving during floods and storms while most petrol motorcycles will fail. The moped has a certified wading depth of 280mm.

The heart of the bike–the controller–is encased in a one piece ribbed die-cast aluminum box for exceptional heat dissipation. It is mounted on the front of the bike for more efficient cooling although its oversized current ratings would allow it to stay cool even during long uphill rides. It is a Field Oriented Controller (FOC) which has a vector control algorithm that maintains efficiency in a wide range of speeds.

This controller also dynamically takes into consideration torque changes according to the road conditions. Finally, it is equipped with a dedicated processor which monitors all electronic components ensuring a safe and efficient ride for you. 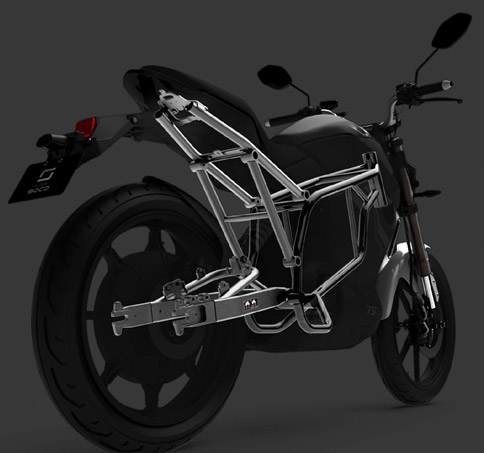 This allows both a robust and light construction. The front end is robot-welded carbon steel that is then painted by electrophoresis. This only weighs 6kg. The rear half of the frame is robot-welded aluminum alloy argon and subjected to T6 heat processing to the strength of 240MPa. This means the bike is strong enough to carry a load of up to 150kg (330lb).

Along with its impressive rigidity, Super Soco TSx also comes with the comfort of exceptional suspension. The bike is supported by inverted 700mm long and 35mm wide motorcycle grade front shock absorbers. With 200mm travel distance, strong torsion resistance, and an aggressively positioned angle, it provides a comfortable ride even on rough terrain. The rear hydraulic and adjustable mono-shock adds to the incredible comfort of Super Soco TSx. This bike features a comfortable racing style padded seat and foot rests that are adjustable in 6 positions. 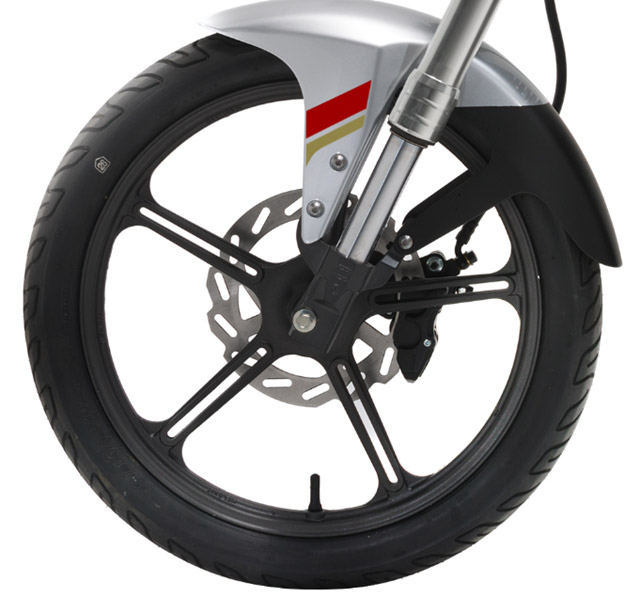 Super Soco TSx is equipped with a massive 220mm disk hydraulic double piston front brake with oversized floating callipers. Since on any bike the front brakes absorb 80% of the pressure of braking, this brake will more than handle any situation you are in. On the real wheel, a 180mm hydraulic disk brake is installed. Waterproofed switches on the rear and front brake levers activate the regenerative motor brakes thereby recuperating the kinetic energy and returning it to the battery.

The smooth regenerative braking is always applied prior to the mechanical braking, thus acting as an Electric Anti Block System (EABS). The battery management algorithm also ensures that the maximum amount of converted electric power is recuperated.

The head light is incorporated in elegant retro style enclosure. Six LED modules are fired in combinations for high/low beam and running head light. These provide brighter and wider illumination than the equivalent capabilities of a halogen headlight. Over 8000 lumens are concentrated in 35 degrees beam.

The front and rear LED turn signals are 40cm apart from each other that make this bike compliant as motorcycle.

Super Soco TSx has a keyless start that only works with the proximity of its fob. It has mechanical and electronic theft protection devices. It is equipped with steering wheel lock that locks the handlebar in one position. Apart from that it is equipped with electronic keyless starting system that makes almost impossible to start the bike if you don’t have the remote ignition activation knob. The Motor automatically locks-up when the bike is armed.

BMOS and NETWORK – Under Development for North America 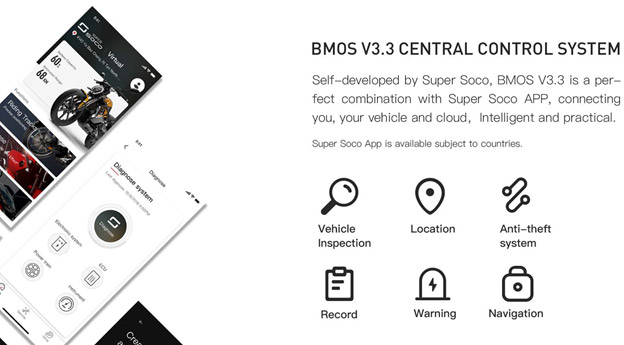